Connect and share knowledge within a single location that is structured and easy to search.

Nice job, everyone! We've gone live and are now open to the public — Enjoy!

We've got a lot of work to do here.

The purpose of a private beta is to prepare the site for opening day. But this site needs a lot more participation or I fear it may never get out of private beta. We've extend the private-beta of this site, but that's only a stop-gap measure to give you more time.

It's odd because there was obviously a lot of drive to have this site created. The proposal was launched in near-record time (~30 days). You usually know when a site is going to do great when there is so much buzz and enthusiasm — but somewhere between creating this proposal and launching the site, only about half the people showed up, and that enthusiasm and momentum was lost.

There's little participation in the meta forum or asking the 7-essential questions during beta. Of the 80-or-so questions we expect to see during the private beta (minimum bar), this site asked only 33 questions. But it's not about simply asking more questions. At this point, we need to gauge the interest-level in having this site at all.

The only way to make up for the shortfall is to use the 'Invite Fellow Experts' interface found on the home page. 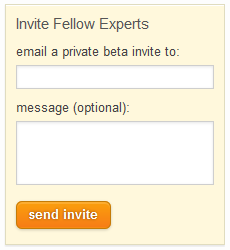 Why not just launch to get more people?

The purpose of a private beta is organize a group of founders who want to help build the new site. We are here to gauge the interest and wherewithal of this group to create a strong foundation before we open it to the public. Historically, when there wasn't enough interest or participation in building the early community, we've tried opening sites despite their lackluster beginnings. But such last-ditch efforts consistently resulted in sites sites that continued their long decline well after they went public.

So we're here to assure the idea for this site has enough interest before launch. That's the entire purpose behind Area 51 and the private beta. But right now my fear is that there was more interest in having this site than using it.

Traffic slows down somewhat during the US Thanksgiving holidays; we've taken that into account. But this site clearly does not have enough participants to found a healthy site. We need more participants.

Derek makes a good point - most of the people who committed to the beta are EE-pros, and so the private beta is a bit of an echo chamber at the moment. There are also a few other reasons I think this private beta isn't doing so well, and why it should be made public anyway:

For these reasons, I think you should launch the public beta tomorrow as planned. You have our word that we will be pushing this Stack Exchange site to the ExpressionEngine community (as we have done with the proposal and commitment phases). However, I can't stand to see the daily barrage of tweets about login difficulties any longer. If you open up the public beta, we can start encouraging people on Twitter to use the site without getting so much backlash about how difficult it is to access the site, we can encourage people currently using Stack Overflow to start asking questions here, and we can encourage our add-on communities to ask questions here.

If you're certain you won't launch the public beta until we get enough questions on it, then fine. We will push this private beta until we are blue in the face, and get enough support to launch it (as we have done with the past two phases). However, I think most of us did not realize we needed to reach a quota here, and were simply sitting around waiting for the site to go public.

Thinking on this: many of the committers to this site on Area 51 were EE pros. People who build several EE sites a year, and probably have been for many years.

Since it's only the committers who can join the private beta, it's in retrospect not surprising to me that we've had fewer questions than expected of us. We pretty much know the answers to most of these questions already.

The EE developer community is much smaller than some others, so right now the beta is a bit of an echo chamber. But the number of developers who are outgrowing/frustrated with other CMS's and giving EE a shot is growing. This is evidenced by browsing the expressionengine tag on StackOverflow, which is often populated by questions from relative newcomers to EE. Obviously they wouldn't have committed to the site in proposal phase, and hence aren't here.

I think Darek's answer pretty much nailed it though, I'm 100% in agreement with everything Adrian had to say. He took this to a whole new level!

I'd also like to point out that there has been a jump in ExpressionEngine related question on SO itself which was probably due to some of the login issues over the past month and partially due to meeting commitment. I'd say there are about 225 new questions that you wouldn't normally have yet those haven't been moved over to our site and or accounted for. Not to mention the other 500 or so from before we started this endeavor.

Those numbers might sound "bla" to you though, please take in all the data before you decide to not open beta.

We have been pushing this site very hard and are willing to push it harder, "blue in the face" even like Adrian said, though, keeping the beta private isn't going to help us do that. The longer you keep the beta private the harder it will be for us to keep the momentum moving and you your self admitted we did an amazing job getting to this point. We won't give up if you don't open beta though, you will be slowing us down.

Please step aside and open the site so we can get-er done!

(I say that with a smile of course)

Update: This question just came over the #eecms hash tag on Twitter and I, wanting to get in there and help as fast as I could, didn't even notice it was the StackOverflow site :/

Point being is that there are quite a few questions going to SO which should be coming here and for some reason they are not. People are having trouble making a distinction and I feel it's the fact that beta isn't open yet. Shoot, even I just made the mistake not realizing I was answering a question on SO vs here on EE.

I understand why you have rules establish to help launch a quality site though, allot of people don't understand this and question all the "hoops." Let me give you an example:

How committed are we and what's it going to take: link

And this is the tweet I got in return:

I don't get this. Is this a Q&A site, or a game? Why set minimum # of daily Qs vs I dunno, waiting until you have a question?

and in return I get this:

Ah, it is a game, and they are the dungeon masters. :) Seems to be a lot of hoops to jump through @ each level. Turning people off.

Point being is that people will use the site though, quite a few won't because you're making them jump through hoops they wouldn't normally be accustomed to anywhere else.

So again, public beta will remove said hoops and in-turn open the door to a great SE site and community. The drive is there, just remove the barrier to entry so we can prove it to you.

Actually I'm a little surprised that we would be in danger of being shut down especially when you compare our stats with the robotics proposal which has been in beta for 30 days at this time. See screenshots.

As you can see we have far more questions per day then they do. Our answer rate is comparable, our avid users is lower, but we've only been running 25% of the time they have but have 80% of the avid users they do. Our total users is also 64% of robotics despite being in private beta for only 7 days. Our answer ration is effectively equal and our visits per day is double.

Please explain how we are in danger of not going public beta when We are equal to or surpassing Robotics which is already in public beta. 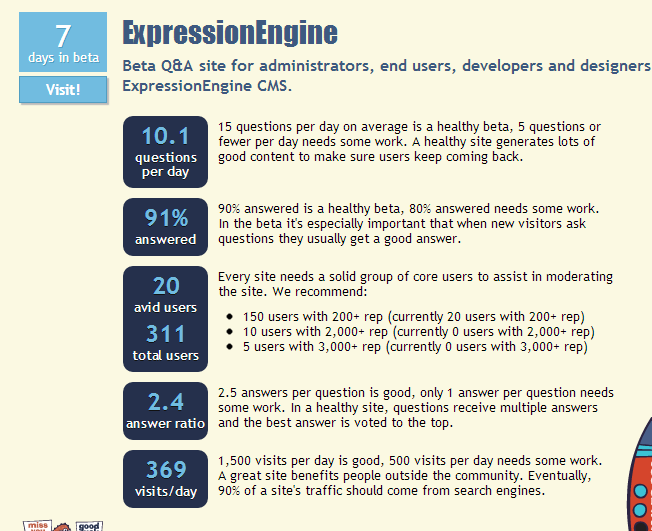 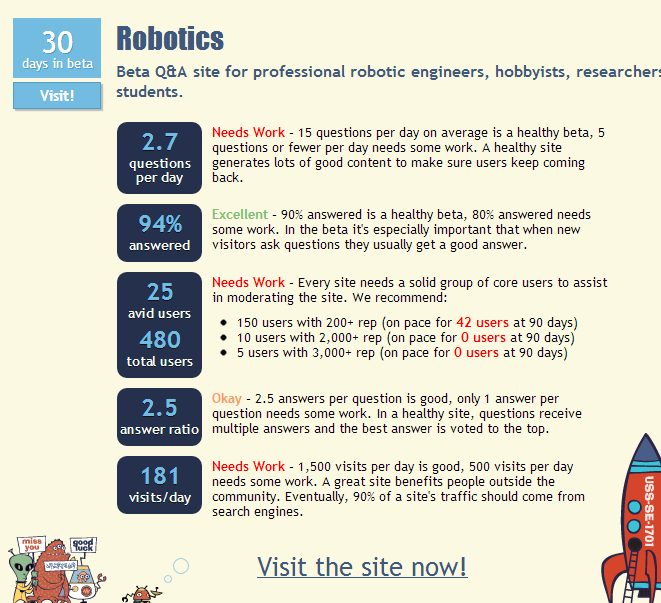 Not the answer you're looking for? Browse other questions tagged discussion .

Welcome!
This site is for discussion about ExpressionEngine® Answers. You must have an account there to participate.
Help
Visit chat

11
How committed are we and what's it going to take?
6
How do we promote our site?
9
Is there a minimum reputation requirement for asking questions?

6
How do we promote our site?
11
How committed are we and what's it going to take?
4
What do y'all think of this support page?
5
Is there a good way to make it easy for users to see questions about core versus addons?
3
Meeting the traffic and rep requirements - should we be worried?
15
Design for ExpressionEngine StackExchange
2
2015 Moderator Election Q&A - Question Collection
1
Edits for edits sake?
3
ExpressionEngine updated site theme is ready for testing!